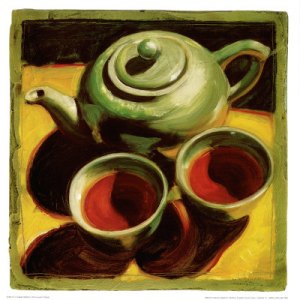 When my kids were little, and I realized that patience was not my strongest suit, I stopped drinking coffee on a daily basis because I thought it made me too edgy. (Allow me to introduce my selves.) Everything I’ve read supports that some people can drink that beverage with little negative side effects, but constitutions such as mine cannot. So I turned to tea instead.

There is so much to know about tea- its medicinal value, it’s popularity, it’s versatility, and the taste.  Just the fact that this beverage is the most widely consumed beverage in the world next to water is pretty fascinating. 1.8 billion cups are consumed worldwide each day!

But most of us drink tea rather than coffee for both the taste and health benefits (all these claims have fancy research labels but many are too numerous to print) and the following are only a few of them:

Tea may play a role as an AIDS fighter (University of Tokyo, Journal of Allergy and Clinical Immunology, 2003) Discovering tea’s role in politics, medicine, religion, and the arts is also very intriguing, but the stories of treachery, espionage, smuggling, slavery, and revolution read more like a trashy novel rather than what we think of in that docile warm cup sitting next to you.. but that’s for another blog post.

A provocateur of wellness and seeker of wisdom, I appreciate levity and simplicity in an artistic life, frugality but with requisite fun, and the freedom to pursue adventure. Blogging here since 2007.. or so...
View all posts by Carolinda →
This entry was posted in Health and Fitness and tagged startling tea. Bookmark the permalink.